The 2019 International Training Workshop on Ultrasound Therapy for Tumors held its commencement ceremony in Johannesburg, South Africa on Sept. 25. Twenty-two well-known clinicians from 13 countries were granted course-completion certificates from the Ministry of Science and Technology of People’s Republic of China.

The Biomedical Engineering College of Chongqing Medical University, China and the Faculty of Health Sciences of the University of Witwatersrand, South Africa signed the Memorandum of Understanding for the purpose of further cooperation in training of high-level talents and other respects. 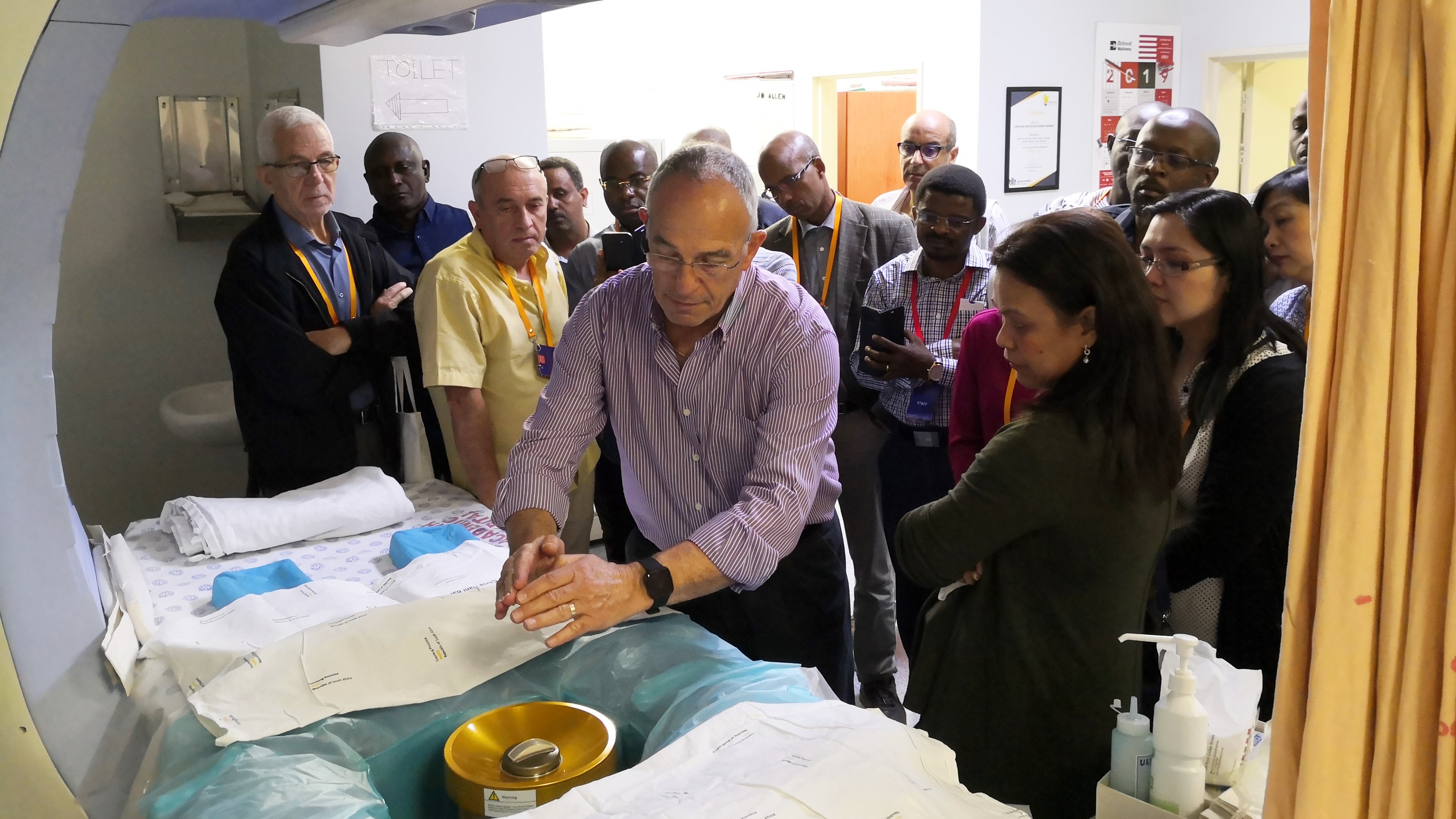 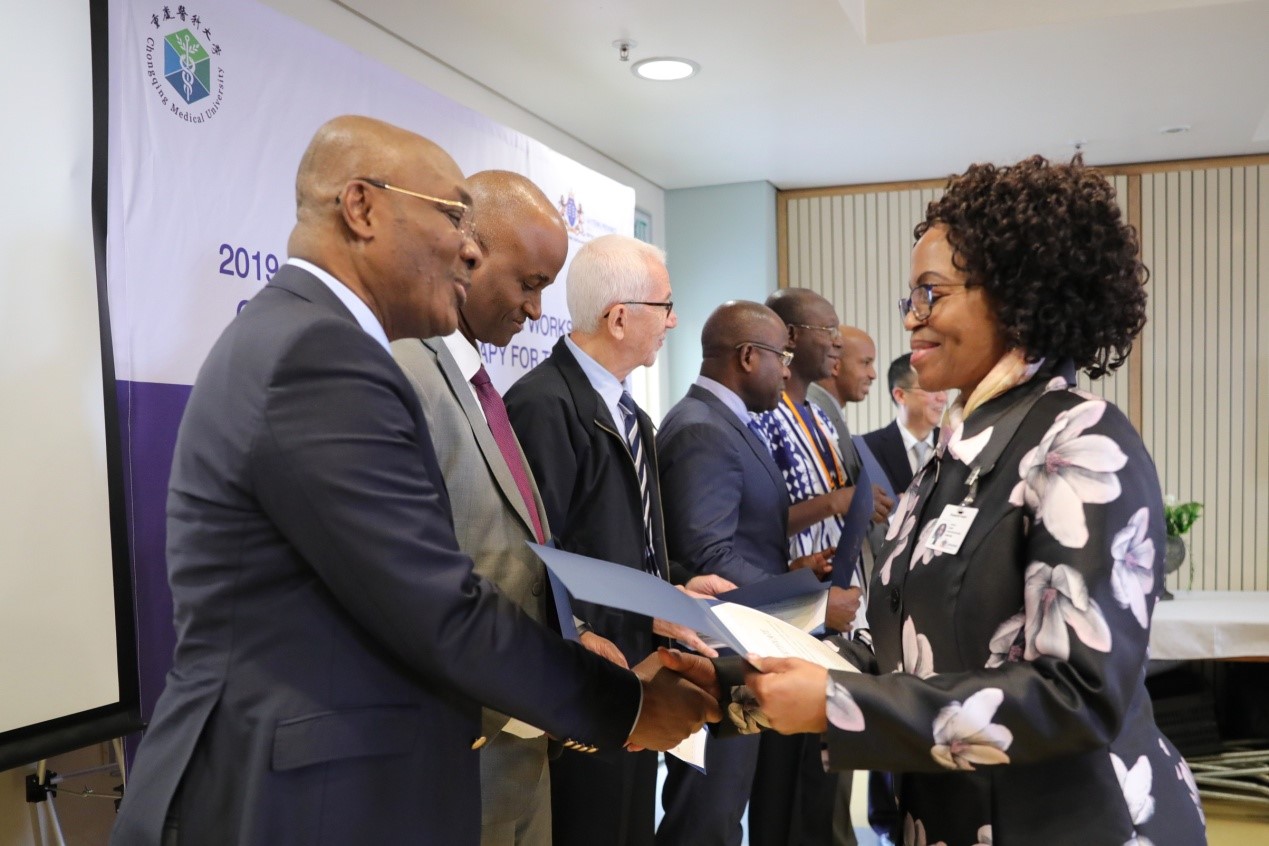 Delegates receive certificates issued by the Ministry of Science and Technology of PRC.

The development trend in medicine goes inevitably from invasive medicine to minimally invasive and to noninvasive medicine. Focused Ultrasound Surgery refers to the typical minimally invasive and noninvasive therapeutic technology that can preserve the organs and tissue structure and functions without open-cutting or bleeding. Being focusable and penetrating, the extracorporeal low-intensity ultrasound beams are concentrated on the target lesion inside the body, resulting in rapid temperature rise at the focal point to 60 ℃ to 100 ℃ within seconds, and thus inducing the irreversible coagulative necrosis of the target lesion without damage to the surrounding healthy tissues.

Following the concept of minimally invasive and noninvasive medicine, the workshop provided a training program with diverse courses integrating the basic principles of Focused Ultrasound Surgery, treatment simulations, and clinical practice. The trainees also experienced a series of ultrasound therapeutic devices with complete and independent Chinese intellectual property rights, including the Haifu Focused Ultrasound Tumor Therapeutic System. Through this Training Workshop, the trainees received a comprehensive understanding of Focused Ultrasound Surgery, which places the foundation for their future involvement in this field and for the dissemination and application of this noninvasive therapeutic technology in their countries.

“Most patients had large myoma when they were examined, and almost half of them would have to remove their uterus”, said Dr. Tshimane Charles Tshepuwane, a delegate from South Africa. During his over 10 years of gynecological experience, the biggest myoma he had ever treated was as big as the 36-week pregnancy. Removal of the uterus imposes great impact on the physical and mental health of women. Focused Ultrasound Surgery can improve the abovementioned situation, reducing surgical operations and relieving the tension of the lack in medical resources.

Since 2012, Chongqing Medical University has organized 7 such sessions sponsored by the Ministry of Science and Technology of PRC in China, Egypt, South Africa. 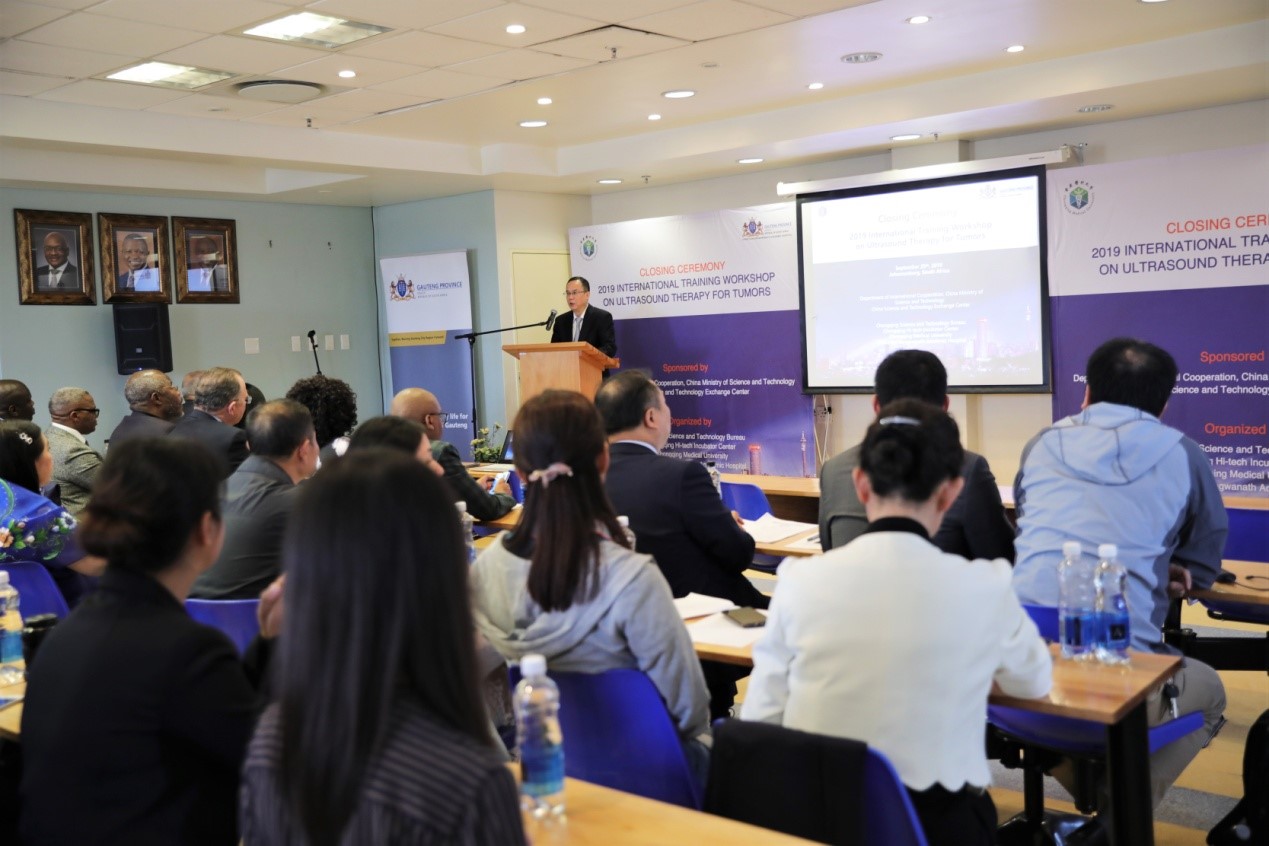 “Chongqing Medical University has made a breakthrough in Focused Ultrasound Surgery”, said Xiaoyun Mu, the vice director of Chongqing Science and Technology Bureau. The 7 sessions have trained 149 well-known clinicians from about 40 countries, including South Africa, the Philippines, Egypt, Spain, India and Ghana, receiving wide praise and contributing prominently to the development and dissemination of Focused Ultrasound Surgery. Chongqing, the only municipality directly under the Chinese central government in the midwest of China, is located at the critical juncture of the “One Belt and One Road Initiative” and Yangtze River Economy Zone. The Chongqing Science and Technology Bureau shall strengthen the scientific exchanges and cooperation among the countries of the One Belt and One Road Initiative and vigorously promote the innovation and development of the emerging sectors of strategic importance.

“Focused Ultrasound Surgery is not a simple innovative technology for tumors but being developed as a emerging medical industry covering malignant and benign tumors and non-neoplastic diseases”, said Prof. Guanghui Wei, Deputy Secretary of the Communist Party of China of Chongqing Medical University. The focused ultrasound therapeutic devices innovated by the research team from Chongqing, which have complete independent intelligence rights, have been exported to 25 countries and regions including Germany, UK, Italy, Russia, Japan, Korea, Egypt, and South Africa, implying the leading position of China in scientific research in and clinical application of the minimally invasive and noninvasive medicine represented by Focused Ultrasound Surgery. 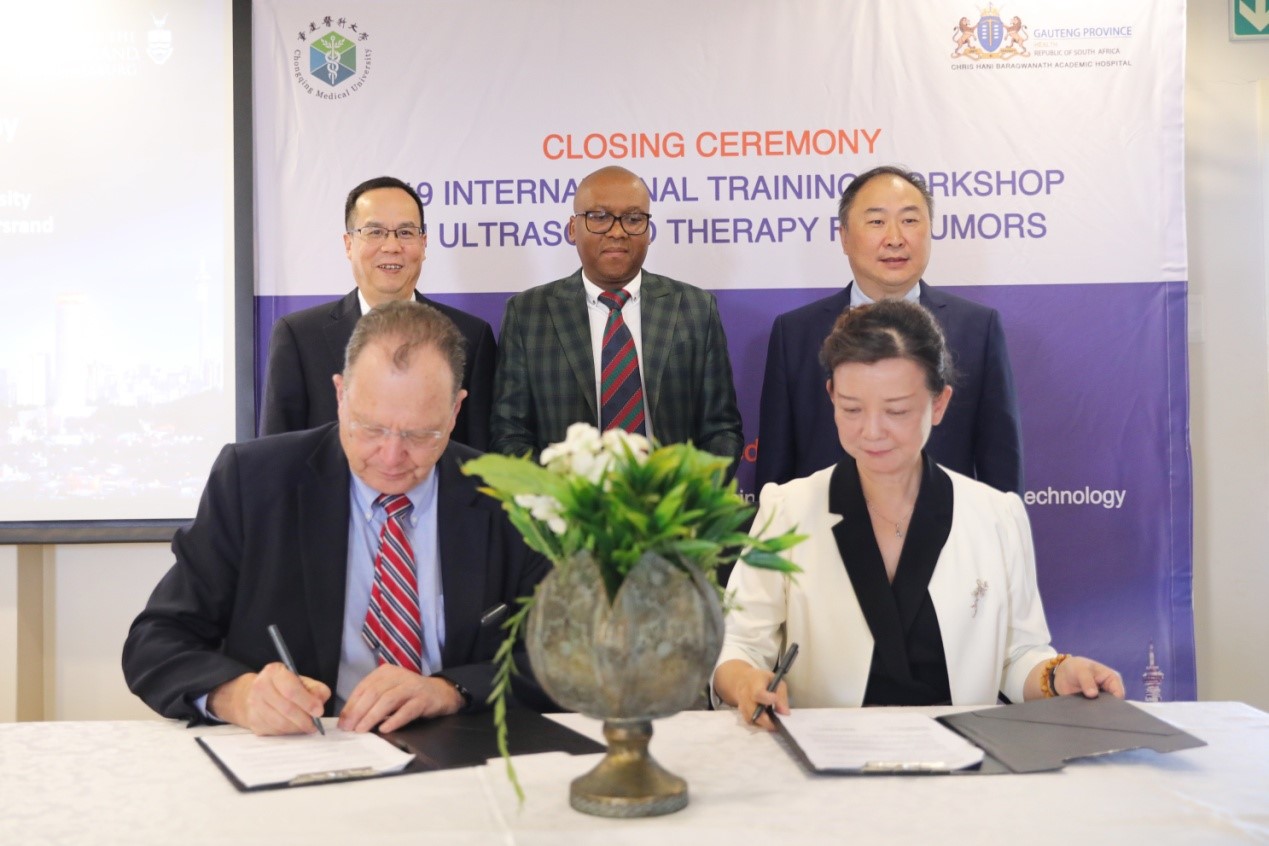 Signing of Memorandum of Understanding.

The Biomedical Engineering College of Chongqing Medical University and the Faculty of Health Sciences of the University of Witwatersrand signed the Memorandum of Understanding for further mutual cooperation. The two parties shall exchange students to pursue graduate studies in either of the universities, conduct joint programs, experiments, seminars and lectures. 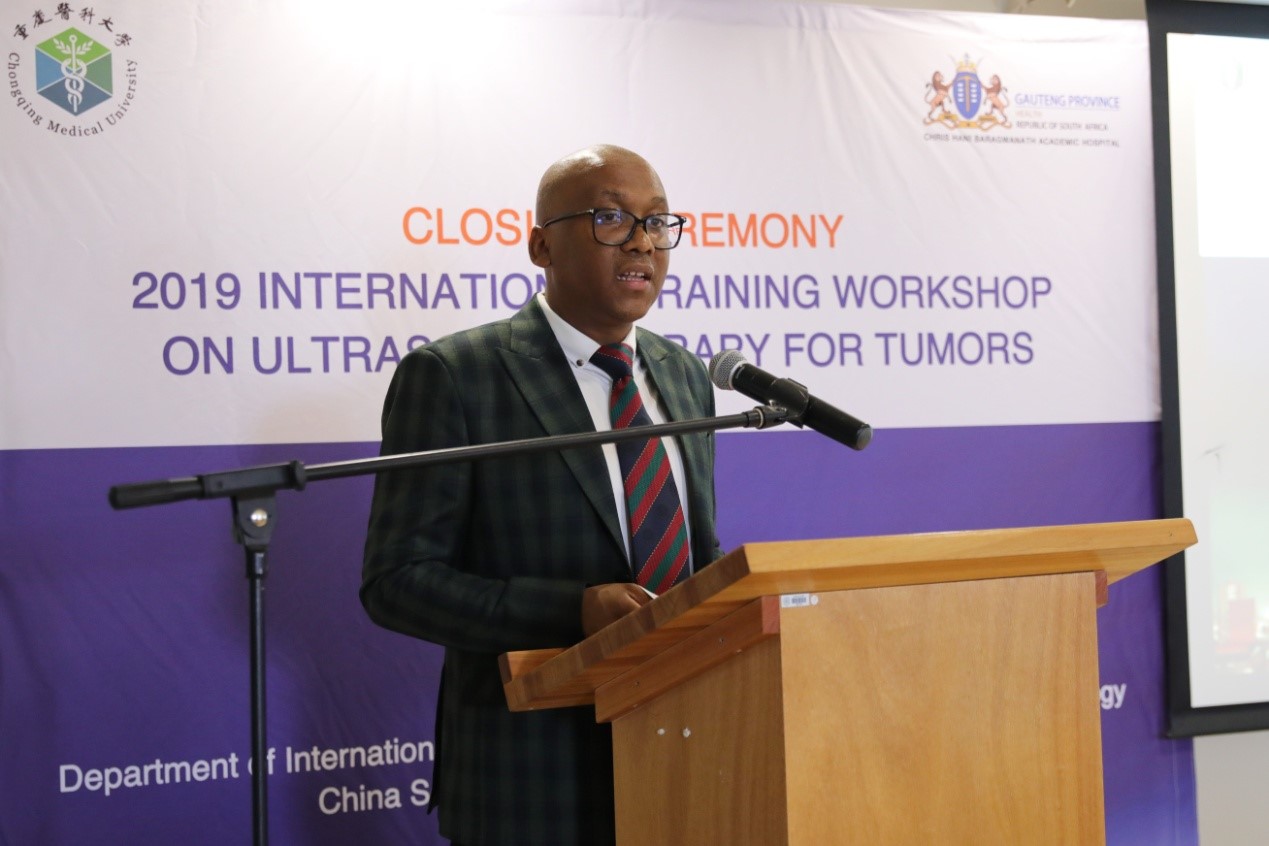